“I got dropped from my last job,” Joe told me as we drove down the highway. Joe was my Lyft driver and he had just picked me up from a hotel about five minutes before. Joe was friendly and seemed to be a good-natured guy. I had gotten in the car and he had immediately started with the normal small talk that people in the service industry are all to use too.

“How’s your day going?” Joe asked. “Well, it’s two in the morning, so, it hasn’t had time to get bad yet, so, pretty good.” Joe laughs politely, just as the cheap joke intended.

Joe’s car is spotless, it’s a Mazda 3. If you don’t know what that is, it’s a cheap and practical car, but it looks pretty good and doesn’t look like my mother owns it. In Joe’s case, it’s also well taken care of. You can immediately tell that he takes pride in the work he does, just that feeling you get when you’re around him. It always seems so rare to meet someone that truly cares about what they do, and when you do, it’s obvious.

For Joe, that pride came in being a Lyft driver. What Joe doesn’t know, is that I don’t like small talk. If I am going to use your time and mine, I feel we should both get something out of it. “So, is this your passion?”, I asked, expecting him to laugh and tell me it’s just a job. But, immediately, his face transformed from that friendly service industry smile to slight shock, to a laugh, and then he said, “for now”.

Interesting response. I immediately start asking him all the follow-up questions that typically embarrass my wife, good thing she isn’t here. “What do you mean?”

“I was a manager at the local grocery chain, I had worked there and the sister store for the last 30 years, but one-day things got crazy”.  Joe stares off at the road for a minute as he replays the story in his head.  “I was the manager in the warehouse and one day the forklift operator got careless and tried moving a stack of pallets without checking to see if they were stable. They weren’t. As the operator started backing up the pallets shifted. The weight shift was too much for the forklift to handle. Next thing I know I hear this scream from around the corner. I run over, and the operator was crushed under the heavy equipment and blood was everywhere”. Joe petered off at the end and went silent for a minute. “It was my fault, and I don’t blame the company. I was fired that day for being the supervisor. I had never seen a serious accident in the warehouse before and never expected one to happen to me, but that day the forklift operator died. 0-60. The worst thing was, no one knew how to handle it.”

“I miss the work, but I get it, I can’t go back, so, for now, I’m a Lyft driver as the court case settles out. It sucks to start over. But, I’ve done it before.”

Joe is what I picture when I think of Americans. Joe wasn’t happy about the situation. He loved his old job, but he knew he couldn’t change anything. He was upset, not because of his job, but because a guy died.

He embraced his new job, and not just as something to make money. He invested himself in it. It didn’t matter if it was being a Lyft driver or a manager at a grocery store. Joe is a hardworking American. He knows what effort is and knows that pride isn’t something to hide, but part of being human. As Americans, we understand that. Pride is the knowledge that you put effort into something worthwhile. Pride is effort exposed. Embrace your pride. Be unapologetic for things you can’t change and remember that the key to most things in life is exactly as one of my officers used to say, “It just takes effort”. Be unapologetically American, take pride in what you do and who you are. #UnapolegticAmerican 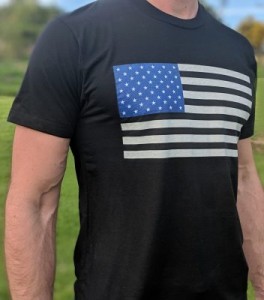 When you’re ready to tell the world that you are a proud American. Get your shirt here.