Trip Of A Lifetime: Rowing The Grand Canyon Part 6 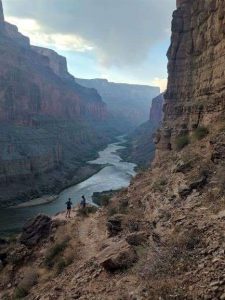 Give Me The Fish: Always have “the next adventure” and live your life the way you want to. You cannot be afraid to take that next step. Don’t let fear stop you from having your next trip of a lifetime.

I just got back from a 16-day trip of a lifetime. And, the first thing I do is message my wife.

“I look yoked!”,  I wrote, with the words accompanied by a picture of my now dark bronzed and heavily bearded version of myself.

The email was to my wife and I was subtly letting her know that I made it off the river safely.

As I hit send, I wondered how many people will end up seeing this picture. Not that I care. (who doesn’t like to be shown off).

I mean, I do look yoked. 16 days of rowing a 1,800-pound oar rig will do that to you. I’m still not near as jacked as the 60-year-old man on the trip that had arms the size of my head. But, hey, I’ve got 30 more years to get to that level. Regardless, I’m really just waiting for her to message back so I can tell her about how awesome my trip was. Too bad she is in a different time zone, so I might be waiting awhile.

Rowing The Grand Canyon Is A Trip Like None Other

I’ve been on numerous trips in the past, but none quite compared to this one. Traveling by boat down the Grand Canyon truly was a trip of a lifetime. It wasn’t just action-packed like most of my adventures in the past. There was time to think. It was the first trip I have been on where I seemed to have an endless amount of time just to reflect, intermixed with adrenalin rushing excitement. 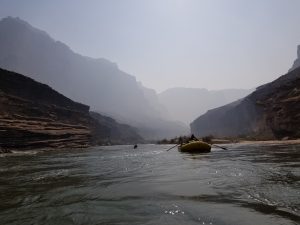 We had traveled 225.9 miles across 16-days. During this time, you almost felt like you had traveled back into the past. You could actually see how parts of the canyon were formed. To include the massive magma dam that was breached after once damning the entire canyon. Or, the massive walls of rock that look like they should fit together, yet they are randomly split apart by hundreds of feet due to some unimaginable forces.

I’ve never even been a big rock guy. At one point, I did have a sweet rock collection as a kid. Even then, I couldn’t have told you anything about them besides “that one is shiny, and that one’s not”. But the geological changes in the canyon are so stark, it’s hard not to be in awe and wonder about how they were formed. There is actually a section called the “great unconformity”. This unconformity is a place on the river where billion-year-old rock is sitting next to rock determined to be around the 500 million-years-old mark. And, no one knows why (at least according to the guidebook).

The Grand Canyon is the only place I’ve ever been that is so truly untouched by man (at least limited). Everywhere you look it’s pristine, whether you’re looking at the walls of the canyon or the collection of debris by the boats in the morning. There is not a scrap of man-made trash anywhere. 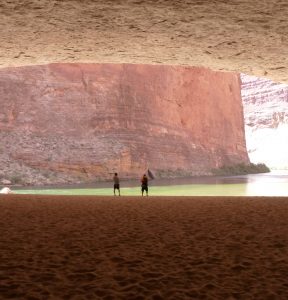 There are numerous side hikes, river offshoots, tunnels, caves, waterfalls, awesome offshore campsites, and oases in the canyon. And all of these places still take hikes to get to. Not only do people not have the time to explore all of these places, but a lot of people take commercial trips. And commercial trips are so focused on the in-your-face and the biggest bang for your buck trip, they never get to see more than 10% of the cool stuff on the river.

Then, of course, you have the people that go on a private trip that don’t care about doing anything more than what’s directly on the river. You have to remember, the river typically attracts experienced boaters, not experienced hikers, so they either can’t or don’t want to take those hikes. 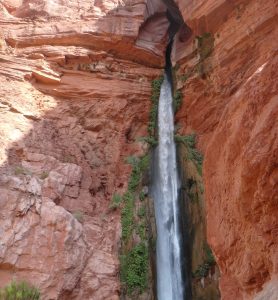 What that means for the rest of us, is if you’re willing to go on these hikes and see these places. There is a good chance that only a couple of thousand people will have seen what you’re looking at. Because don’t forget, there are only two roads that touch down in this stretch of the river. The start and the end. And, this stretch is 225.9-miles long.

The Grand Canyon is full of “the random”. You will be floating down the river and all of a sudden there will be a random river gushing out the side of a solid rock wall. Then, you will round the next bend and there will be a massive hole in the canyon wall that you could fit a building inside of. And of course, you have the casual appearance of massive big horned sheep. 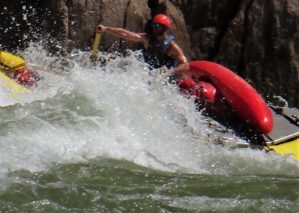 But, none of that is taking into account the “big water” that most people head to the Grand Canyon for. Water that consists of 20-foot crashing waves, whirlpools measuring in the double digits, and rapids that put most rivers to shame.

Life Is About Adventure, Always Have A “Next” Trip Of A Lifetime

This is the kind of trip is I live for. It’s the embodiment of having complete independence to live how you want and a culmination of multiple experiences to get here. But, this is not the end. You will never find me without a next adventure in the books and neither, should you. For me, the next adventure is a 50 mile Ultra Marathon up in Foresthill, CA.

If you want a trip of a lifetime and you don’t know what that should be, feel free to message in the comments or social media, I would be happy to brainstorm a few ideas.

Always have the next adventure and live your life the way you want to. You cannot be afraid to take that next step. Don’t let fear stop you from experiancing your next trip of a lifetime.

“Live a No Hesitation Lifestyle“

If you want to read this trip from the start head to the first article of this series, Rowing the Grand Canyon Part 1: I’m Pretty Sure This Won’t End Well.