Life Is What You Make It Focus On Success: Rowing The Grand Canyon Part 4 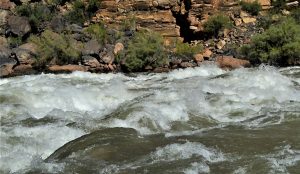 GMTF: “You never look where you don’t want to go”. Don’t be distracted from the path you chose in life. It’s only those that ignore all else that find success. Life is what you make it, so focus on success.

The people around me have obviously never heard the phrase “life is what you make it”. The setting sun makes the worried expressions surrounding me stand out like some kind of stone statue.  Though, the fear is so obvious the contrast is probably not needed. We are sitting around camp discussing the boogie man of the Grand Canyon, a rapid affectionately called “Lava Falls”.

Two of these people have been down the canyon multiple times and are very experienced boaters. And the only thing they have been saying for the last 20 minutes is how dangerous and big the rapid is. It’s like they are stuck in a loop, but with a thesaurus thrown in to slightly spice things up.

But, of course, it’s not just these two talking about how “scary” the rapid is. As is typical, the sheep have flocked to the popular viewpoint and latched on. Now we have everyone talking about this rapid like it’s some kind of terrorist coming to hunt down their children.

Never Look Where You Don’t Want To Go

It’s not that I’m not nervous, or scared of this upcoming rapid. I mean, I know nothing about it besides what the guidebook says and what I’ve been told. And to quote the guidebook “It drops 1,500 feet in a little over a mile”, “Yeesh”, and “Remember it’s less than 20 seconds long”. But, I refuse to focus on the worst-case scenario.

I grew up boating as a kid, starting at the age of 4. Not unusual in the boating community, and especially not unusual in my family. But, the result, a lot of my life lessons are from boating. Fortunately, they tend to apply to the rest of life as well. One of these lessons has stood out over the years. “You never look where you don’t want to go”. I can still hear my dad saying some variation of this in my head. Ingrained from the years of repeating himself after fishing my boat and myself out of the river from disastrous runs through rapids.

In kayaking, the concept is straight forward. When you turn your head to look somewhere, your torso naturally turns, causing the boat to follow your body. So, by looking at ugly life-threatening things, you’re actually sabotaging your plans to avoid them. When I finally learned this lesson, not only did it save fellow boaters a lot of time rescuing me, it also allowed me to start turning my life around.

While in kayaking, you have a  a very tangible example of what happens when yuu focus on the wrong thing in life. This applies to the rest of the world as well. The trick is to always focus on success

Life Is What You Make It, Focus On Success

Life is what you make it by deciding what you want to focus on.

Whether you are focusing on the positive or the negative, that is exactly the way your life will turn out.

The solution is obvious. Just point your head and face where you want to go. Always have that positive goal in mind, always have your success in focus.

And if you don’t, and you choose to focus on the negative, you’re already planning for failure.

I Know You’re Scared, But Calm Down

I look into the faces around me and prep for the explosion of emotions before I start to speak. “It’s not that big of a deal if someone swims, a kayak flips, or a raft gets thrown. We have already done it multiple times this trip. We’ll figure it out. We just focus on success”

The air is instantly filled by slightly shrill voices as they say something along the lines of “I’m really freaked out”, but disguised as something more emotional yet intelligent verbiage (they are mostly doctors and teachers). Starting with “you don’t even know what you are talking about”.

Which honestly, in terms of this specific rapid it’s true. Can’t really argue with that. To include a stand out line, “People die if they are in the water for more than 10 minutes”.

The last one was a little ridiculous. While also true, you probably shouldn’t be on the trip if you can’t get yourself out of the water in 10 minutes, or find a place to heat up in the 110-degree desert we’re in.  And, saying that I swim in the Pacific Ocean a couple of times a week at about the same temperature as this. I’m not concerned.

I continue, “As long as you get away from the raft if it flips, we’ll all be alright”. Everyone explodes again. One guy tries to calm the situation, “I know you are trying to be positive, but…”

Nothing before the “but” matters and at that phrase, I realize this entire conversation is hopeless. I silently hope they’ll be ok the next day.

Your Success Is Based On Your Mental State

Everything in life is what you make it, it’s all mental. Like I was taught in the first days of kayaking, if you focus on failure, you will fail. This is visible in everyday life. You know the guy at work who drones on about how much his life sucks? Well it does, and its mostly because he is actively ensuring it sucks. Or, the guy that shows up to the gun range and talks about how awful he is and then misses every shot, same principle.

If onl;y that guy made sure he had all of his focus on success the outcome might be a little bit differn.

Examples Of This Are Everywhere

My wife is a prime example of this. She is one of the most coordinated and athletic people I know. You know, one of those people you borderline hate when you first meet them because they seem to be good at everything.  That’s her.

She’s a multi-sport athlete that has excelled and competed in sports at every level, to include being ranked 4th in the country for Rugby.

Yet, she refuses to go running in the woods because she has a fear of tripping and falling, and lo and behold, the few times we’ve gone running in the woods, she trips and falls. It’s not because of her coordination. I’ve seen her dodge feet, legs, and bodies while running through piles of people on the rugby field. Yet, she fears the one lone stationary stick in the woods.

My group is currently doing the same thing. They are focusing on all the negatives and refuse to focus on the path to success.

Which is crazy, because overall, we’ve had a successful trip. We’ve gone through 178 miles of river with no major injuries and have gone through a lot of “big water”.

And all of it was overdramatized and talked about being scarier than it was. Yet, the talk of the crowd created this boogie man out of one big rapid. I eventually get up and walk away. Nothing personal, but sometimes you have to extract yourself from an environment that will drag you down with it.

Well, I Could Have Guessed That Ending

The next morning, we ran Lava Falls with no major injuries. It was a blast. If my oar rig didn’t weigh 1,800 pounds, I probably would’ve carried it back up and done it again.

Nothing like launching an 18ft raft into the air, like you’re on the most out of control roller coaster ride of your life. I hit the route through the rapid exactly as I wanted and had fun doing it.

Though, it wasn’t carnage free. There was one large rescue and a close call. The first was a leader in the “tribe of the fear speakers” having not hit the line she wanted and the other was the “I know you’re trying to be positive” man, who went sideways through some of the largest waves on the river, and happen to get lucky enough not to flip. His failure to focus on success, not only cost him his pride, risked his health in the process.

Life Is What You Make It, Good Or Bad

These are great boaters, who I would be happy to listen to for advice any day. And, they are great people. But they still made a mistake that is common to all of us. A mistake that could have much worse consequences.

They focused on what could go wrong instead of what could go right. The only correct thing to do is acknowledge the consequences, route your path around them, and then follow the path you chose. You already know it leads to success, you picked it, so don’t let any distractions pull you away. Remember to always focus on success.

To return to the comment “you don’t even know what you’re talking about”, while this is also true, I don’t need to. It’s all mental. Life is what you make it, so you might as well focus on success and make it into the life you want it to be.