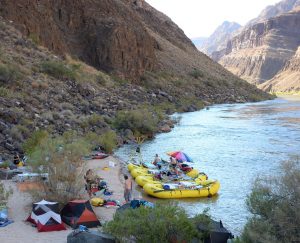 It’s funny what becomes normal. I’m looking up at a thin strip of stars split between the Canyon walls knowing that it’s about time to wake up. Not that I know what time it is. I had ditched my watch a couple of days prior. Not because of any higher ideal, or to get away from time, but because I figured I might as well get an even tan.

I hear Dean rustling around with some pots as he starts making coffee.

He is always first to get up and make the morning coffee. I continue staring up at the sky. Over the last six days, we have covered another 66 miles. We are all now in a routine. Starting with coffee. After that, we all do our own thing to get ready. People that camped on shore pack up their tents and bags. Those on breakfast crew make breakfast, dish crew does dishes and groover duty (the groover is a 20mm ammo can that is the solid waste toilet for the trip) takes care of the groover. Once the jobs are done, kayakers prep their gear and rafts get rigged for the day ahead.

“COFFEE!!!!!” Dean yells. His voice echoes down the canyon. Within seconds, the first signs of movement appear around the camp. The early risers are lured awake by the indication of coffee.

I climb out of my bivvy sack and stuff it into a dry bag for the day ahead. Once I’m confident I won’t be sleeping in a soaking wet bag, I dangle my feet off the side of the rubber tubes as I brush my teeth. Spitting out the excess toothpaste, I stand up and pee into the water (Grand Canyon requirement). I hear Diane climbing out from under a sheet on the next raft over and look over. “Good Morning!”, “Morning T!” she responds.

I finish up and hesitate for a second before jumping into the 55-degree waist-high water. The familiar shock hits my body as the cold-water rushes around me. Overnight my raft had floated away from shore with the rising of the tides, and I’m about 8 feet from shore. I start wading to the river bank.

I head to the 5-gallon bucket and hand pump we use for handwashing and scrub my hands before getting breakfast. Then I grab the mug labeled “T” and pour some coffee. The majority of the 16 person trip are now awake and the camp is starting to get busy.

Today Is A Little Different Than Normal

Today we are exchanging two people at Phantom Ranch, the only other “easy” access point to the river from the outside world. And, even there you have to hike 7 miles or so along one of the trails like the “Bright Angel”.

These two people couldn’t stay for the whole trip and two others were going to swap in for the last eight days. Today is also the first day of “big “rapids that the trip has been talking about. The big water of the big water.

I’m not sure quite what that means, because the water had already been pretty big. To include a few close calls, and a rapid called “House”, where you have to turn around and row backward because it’s the only way to generate enough force to not get smashed into a wall. And then without looking, know when and where you need to turn the raft to make sure you don’t get smashed into another wall or end up pinned against rocks with the equivalent of 20 firehouses aimed at you (not an entire exaggeration).

But, at this point, even these rapids have become normal. A couple of weeks prior my “normal” was waking up at 4:30AM, working out, running with my dog, grabbing coffee, going to work, coming home, eating dinner, writing, reading, working out, and going to bed. Only broken up by a few other meetings, and groups throughout the week. Now it’s normal to hear “LAST CALL FOR GROOVER!” screamed, and someone to yell “WAIT!” in return before it’s packed up and put away until the end of the day.

We finish loading the last items and rigging the rafts. Time to head down to Phantom Ranch, it’s only half a mile or so to get there.

I take a few strokes, feeling the wear on my shoulders as the tendons strain in agony. They have been taking a beating over the past few days, but that too has become normal. I remind myself to remember to take my daily dose of vitamin “I” and “T” (Ibuprofen and Tylenol) when we get to the beach of Phantom Ranch.

We pull in and I immediately feel out of place. For one, there are people on the shore. Normal people. And they are wearing clothes. I, on the other hand, haven’t worn anything except shorts, sunglasses, and a life jacket for the past 8 days. And shoes when required for the short hikes along the river. I had almost forgotten that this wasn’t normal anywhere else. And I have to pee, and I’m annoyed because I can’t do it in front of these people. I have to actually find a place.

My “normal” has definitely shifted, and I just realized it. This isn’t the first time this has happened to me. I actually feel like it’s one of my “superpowers”, being able to assume a new normal rather quickly. Whether that’s sleeping in ditches on a transcontinental bike trail, waking up and checking for scorpions under my cot in the desert, or sitting on the groover out in the open and watching the river flow between the canyon walls.

Finding normal is always the key to keeping myself stress-free. Routine lets your body know what to expect and reduces surprises (more in my previous article). It’s about finding the routine in the non-routine. But, it’s not instantaneous.

And, now, my routine is broken.

I’m not even onshore and I’m ready to leave.

Returning To My “Normal”

We finish our exchange of people, meet the new guys (we had already said our goodbyes to the other couple that left). Then sent some mail out by mule. This area is obviously for tourists, even though you can only get in on foot or helicopter, it’s the most common hiking trail of the Grand Canyon. The mule thing is obviously some chincy tourist thing, but I, of course, do it. Mostly because I think it’s hilarious for my wife to get a letter with a stamp saying “delivered by mule” while deployed on a warship in the ocean.

Finally, we agree to head out. I can’t wait to get back to “normal”.