Feeling Uncomfortable And Loving It: Rowing the Grand Canyon Part 2 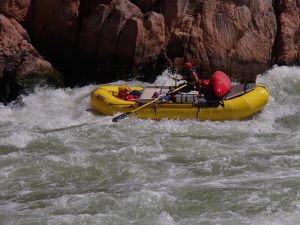 Give Me The Fish (GMTF): Feeling Uncomfortable is not inherently bad, sometimes it’s just the price you pay for a great story.

I would like to use the word “serene” or “calm” to describe how I feel as I move downstream. Mostly because I’m surrounded by some of the most picturesque scenery I’ve ever seen and would be for another 16 days. But, for some reason, when I think “serene” or “calm” I associate the word “comfortable”. And to be honest, saying I’m feeling uncomfortable is rather an understatement.

While I’m pretending to be unaffected, it feels like it’s 15 million degrees out and I am slowly sweating the equivalent of a swimming pool out of my pores.

Everything around me is radiating heat. The cooler I’m sitting on, the couple hundred pounds of steel creating the oar rig platform, the bags of gear, all of it is constantly absorbing heat. All while I hold stcky black oar handles.

I have to concentrate not to touch anything besides what I’m already holding. Otherwise, I might as well do a bare-handed grab of an oven tray.

The chincy umbrella I have rigged is the only saving grace that I or any of the other three rowers have from the beating sunlight. Too bad it only covers my left shoulder.

I can only imagine the sweet tan line I’m going to get by the end of this.

And the Frustration Continues

Along with the heat, I’m slowly figuring out that, a 1,800-pound raft, powered by me, doesn’t move very fast or very far without a tremendous amount of work. I especially realize this when the water wants to push me into giant rocks at very fast speeds, suck me towards massive whirlpools (yes, the Grand Canyon has massive storybook whirlpools), or lead me into water vortexes that river runners affectionately call “holes”.

For those that don’t know, these are water phenomenon’s that like to suck things to the bottom of the river and not let them back up for a while. Then there are these obnoxious things called eddies, that normally are safe spaces on rivers, being calm patches of water. But on the Grand Canyon, they like to suck you back upstream in flat water, just to make you re-paddle the 200m’s you just covered. Needless to say, I’m a little frustrated, so we will add that to the feeling uncomfortable category.

I see the 11 kayakers in front of me start pulling to the side of the river. They are waving for the rafts to move over as well. As I slowly start closing the distance. I can hear the familiar rumble of rushing water as it starts rapidly descending and smashing into, over, and around rocks. We have heard this sound all day, but only for minor riffles and small rapids. Though, in retrospect, they would probably be full-fledged rapids on other rivers. But not for the Grand Canyon, where 8,000 to 20,000 cubic feet per second of water is a constant occurrence. Or, 149,600 gals of water a second depending on the tides.

Don’t Worry About It, It’s Nothing

The loud rumbling is heard in the distance. It reminds me of a roaring stadium. The rumbling is louder as I approach the pullout.

The raft touches shore and I jump off and start tying off the bow line. My adrenaline starts to race as my “feeling uncomfortable” ratchets up to nervousness and excitement.

“What’s up?” I ask as I meet up with the group. Rob (a fellow rower) responds, “It’s Badger Creek Rapid, the first larger rapid, though it’s not a big deal, it’s still relatively small in the scheme of the river”.

We walk up the rocky slope to scout out the rapid. Large boulders have setup a dam across the river and water is rushing over them in what is called a “debris field”. I soon find a clear line through the rapids to run. A line that will hopefully minimize the carnage, taking special notice to avoid the large raft eating hole on the right-hand side of the river. After some debating and a few words of advice from the other experienced Rowers, we start untying and heading into the rapid.

I’m last to go. The raft I’m in is called the sweep boat, essentially it’s the emergency boat. It has the major medical aid kit and the satellite phone for if we need to call in a helicopter for airlift. The one real benefit is that I get to watch for all the places not to go, courtesy of those committing trial and error in front of me.

The rafts and kayaks slowly filter out, when I hear Sarah say, “What’s up with that raft? I think it’s Deans”. Looking downstream, there is a large yellow object held in place and being thrown up and down.

For most onlookers, it would look pretty odd. A large object in rapidly moving water, yet curiously not going anywhere. But to boaters, that is what we call a hole.

I quickly realize that I should not be seeing all yellow. There should be a steel platform, people, gear… “f@^%, the raft flipped”. Forgetting about the carefully planned route, I start pushing hard on the oars to get down to the flipped raft.

I’m no longer feeling uncomfortable, as I cast off all concerns. My only thought it to get to the flipped boat. As I start moving, relief washes over me as I see the raft get flushed out.

A second later I hit the start of the rapid, a wave that looked small from the shore rushes towards me. Though, it doesn’t appear so small now. I turn the raft just in time to take the brunt of the blow on the front. Water floods over the raft, as 18 feet of rubber and steel is buried under hundreds of gallons of water. The water shoves the raft and tries to turn it sideways.

Well, I Guess I Did Come Here For Big Water

I can’t let that happen.

The second a raft gets hit sideways by a wave it gets flipped over, and then carnage ensues. Kind of like what happened to the raft in front of me.

I grit my teeth and push as hard as I can on the oars to spin it back to the front. The water feels like concrete as the rapidly moving water shoves the paddle downstream. My shoulders burn and my legs drive as I force the massive rubber behemoth I’m riding to head in the right direction. I continue to get smashed back and forth as I get hit wave after wave as I rapidly descend the river. Finally, the last massive wall of water passes.

“That was sweet!” I think as the last massive wall of water passes.

I sober up as I see the raft downstream. The kayakers and the other oar rigs have already dragged the upside-down raft out of the mainstream of the river and into a calm area.

I tie off the raft and rush over to assist. Dean is helping to rig the rafts, so at least he isn’t hurt.

We agree on a plan, finish rigging the ropes and organize the people. The ropes are to pull the far side up as we use the shore as a fulcrum point. Two guys and I are on the bottom to push the raft up and over.

“On three, 1…, 2…, 3…” the raft creaks as the ropes tighten as the group strains under the weight of the raft.

Finally, it breaks free, rises up, and crashes down. Thankfully upright. We all take a second to catch our breath and look over the raft.

It Could Have Been Worse

On the bright side, it doesn’t look like we lost anything. Dean did a hell of a job rigging the raft. On the not so bright side, both oars are broken and shattered.

Good thing we have spares.

It’s still a heavy loss for the first day of a 16-day trip. But, no one got hurt, no other major gear was lost, and it was still awesome.

The first day was wrapped up with no more major events and we finally pull into camp at Soap Creek. Feeling uncomfortable from the aching muscles and raw hands and not really looking forward to unloading the raft, I go to get up and my body protests.

The day was a lot of swearing and cursing and floundering as I fought the massive oar rig, but overall, it was awesome. Feeling uncomfortable was well worth the cost of being here. As the sunsets on the canyon walls, turning them from yellow to orange to red, I don’t even really remember the heat of the day, the slow-moving of the oar rig, or the frustration of the unpredictable water in the river. I’m already lost in reliving the day and can’t wait to see what’s next.

*If you are just jumping in now, I recommend you head back to the first article in this series.